On September 28th, the cloistered Carmelite nuns of Las Cruces, New Mexico, celebrated fifteen years of existence in the Diocese of Las Cruces, having come from Chihuahua, Mexico, in 2007.
The vibrant community now numbers ten  professed nuns, as well as two postulants. It is very much a bilingual community, with both Spanish and English spoken by the majority of the nuns.
Abbot Christian and Brother Charles attended the celebratory Mass. Las Cruces is about a six hour drive from Christ in the Desert, a pleasant trek along Interstate 25.
The Bishop of the Diocese Las Cruces, the Most Reverend Peter Baldacchino, who is originally from the Island of Malta, was the principal celebrant and homilist at the anniversary Mass, which began at 5:30 pm.
Bishop Baldacchino too is multi-lingual and a fine homilist. He reminded his hearers that Saint Paul the Apostle spent time on Malta, and is therefore highly venerated by the Maltese.
After the anniversary Mass, a delicious supper was offered to the fifty or so guests in attendance. It was held ‘al fresco,’ as the sun was setting in the beautiful Mesilla Valley, as it is called.
To the Carmelites of the Monastery of Saints Joseph and Teresa Benedicta of the Cross, we offer our congratulations and prayers. Ad multos annos.
Abbot Christian and the monks 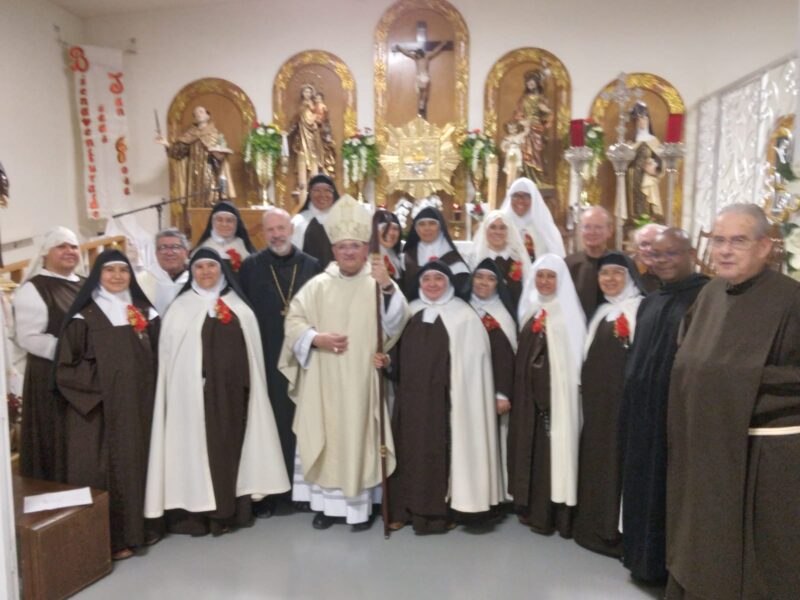