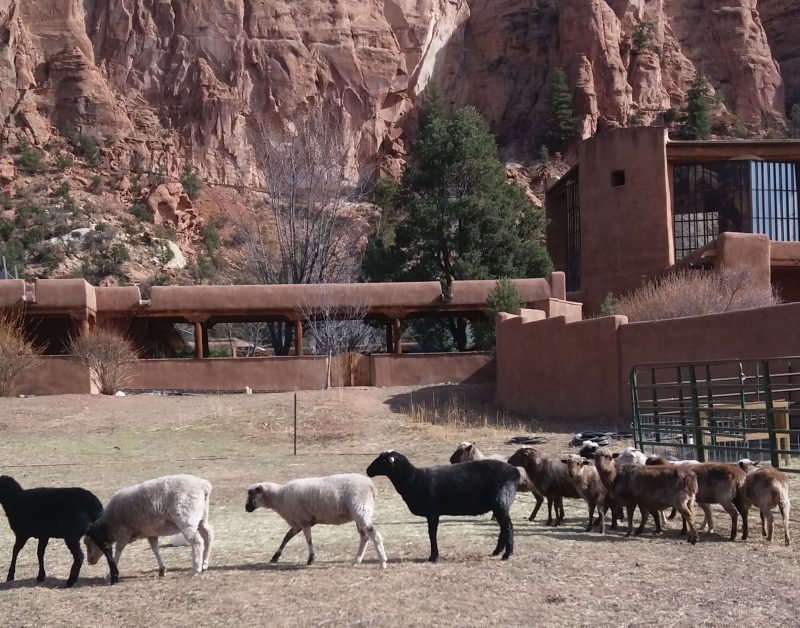 Why Navajo-Churro sheep? Let me begin by saying we consciously chose to have this breed of sheep on our property, to raise and care for, to shear for wool to spin for us to use in weaving, as well as to sell. Our founding monks had the same breed for some years in the mid-1960s on the property here. For various reasons, the early monks ceased having sheep by the mid-1970s, so we have been “sheepless” for approximately the past forty-four years. Tempus fugit. But all that changed with the arrival of our first four Navajo-Churro ewes in mid-August this year, followed by eight more sheep of the same breed, arriving a few weeks ago.

We now have a flock of twelve ewes and lambs, ranging in age from a few months to a few years old. They are all welcome additions to the monastery, residing in what we now call the “Abbot’s Field,” adjacent to the abbot’s quarters in our main cloister. Some of the sheep have names and some still await being named. We currently have Gloria, Clara, Amelia, Isabel, Panda and Angel with “official” appellations. Six more we anticipate naming in the coming weeks. A few of the unnamed ewes look remarkably alike, so it will be a challenge to remember “who’s who” once they are named, but we’ll cross that bridge when we come to it. The unnamed sheep are mostly brown and grey in color. Any suggested names are welcome.

If you have visited our monastery website over the past months, you will have seen some photos of our sheep. The two donkeys we now have, Zoe and Connie, also featured on our News Page, are already duly named. Their job, for those who may be wondering why we have them, is to protect the sheep from predators, such as coyotes, mountain lions and bears. Donkeys, llamas and dogs are the most often-used guards of sheep, with donkeys perhaps now being the most common, but don’t quote me on that one. Sometimes people are surprised to learn how gentle donkeys are in general, but how protective (as in fierce) they can be when threatened by predators. We honestly don’t expect many threats with the pasture the sheep live in, as it is so close to human inhabitants (the monks), but one never knows, and it’s always better to be safe than sorry.

Is there anything special about Navajo-Churro sheep, in comparison with the myriad of other breeds “out there”? You bet your life, as the late American comedian Groucho Marx (1890-1977) used to say. Navajo-Churros have been in these parts of the Southwest since the 1500s, having arrived with the Conquistadores coming from Spain, where this breed had been brought, originally coming from the Middle East. The Churro sheep were brought to Spain by Muslims, but obviously not yet called “Navajo” Churros, but simply “Churros.” Ask a Spanish-speaker today the definition of the word “churro,” and he or she will likely tell you it is a fried-dough pastry snack, or a word that means “an attractive person.” Not that either description precisely fits our sheep, though they are “cute,” and as the patriarch “Gus” in the 2002 film, “My Big Fat Greek Wedding” would say, “so there you have it.”

But back to the question: “Why Navajo-Churro sheep?” Besides the fact that the first monks of Christ in the Desert had the breed, we recently chose to re-introduce the breed because of it hardiness for living in this high-desert setting. The uniquely thick coats, or fleece, that Navajo-Churros possess means that they can be sheared twice a year, in contrast to most other breeds of sheep that can only be sheared once a year.

Centuries ago in Spain the ancestors of our modern Navajo-Churro sheep were a common breed. I like to imagine Saint Teresa of Avila and Saint John of the Cross perhaps owning Churros in their respective monasteries or at least seeing Churros on a regular basis in their travels around Spain for the development and diffusion of the Discalced Carmelite Reform of the 1500s.

Navajo-Churros today, like their forerunners in Spain, are not large, but are rugged, fine boned, long-legged and gentle. They were easily put to work in the agricultural endeavors of the Spanish missions which the Franciscan friars led in the so-called “New World,” and eventually were used by settlers as well in the Southwest, once a part of the Spanish Crown. Since Native Americans were already here, the presence of the Churro sheep quickly became part of their farming endeavors and helped in the change of the culture from a more hunting and gathering one to shepherding, which included eating the animals as well as using their wool for the weaving of practical items, such as blankets, rugs and clothing. Today Navajo tapestries are a sight to behold.

Over the centuries, the breeding, shearing, spinning, dyeing and weaving of Churro wool became a valued commodity and the meat of the animals a regular part of the Navajo and Hispanic peoples’ diet. As Navajos often repeat, “Sheep is Life.” This reality runs deep among the Navajo people to this day. Sheep are important expressions too of Navajo creativity and spiritual life. Much of this transcends what most “anglos,” those not Native Americans (myself included), can fully comprehend, but I deeply respect and am in awe of what I am learning from Navajo neighbors and friends about the connection between sheep and life itself.

In the course of the last five centuries, the Navajo-Churros have adapted to the challenging climate of this part of the country. The double-coated fleece of this breed is an ideal protection against rain, snow, dust and cold. The outer layer of the fleece is long and course, while the inner layer or under-coat is almost down-like. I have already observed since the arrival of our Navajo-Churros this summer, that the occasional hard rains we have had and even a little snow that fell some weeks ago, seemed not to have had an effect the sheep in the least. They carried on calmly, as if nothing had fallen from the sky!

The long and almost greaseless fleece of the Navajo-Churro makes it very desirable for spinners of wool. Our Brother Peter recently took a course in spinning at Tierra Wools (www.handweavers.com) in nearby Los Ojos, New Mexico, and became an expert in spinning in a matter of days. He exclusively spun and spins with Navajo-Churro wool.

Two other of our brothers, Prior Bonaventure and Brother Raphael, learned at the same school, Tierra Wools, the art of hand-weaving, and also only used Navajo-Churro wool in the amazing and beautiful rugs they produced. We are slowly becoming spinners and weavers once again, something we have not done here over the past thirty or more years.

One of the joys of now having Navajo-Churro sheep is the opportunity to meet some of our Navajo Nation neighbors, who are assisting us. One of them, a young Navajo man, has become our sheep-shearer. He uses the traditional hand-held shears, not electric clippers. His dexterity and speed amazed us as he sheared our four “original sheep” this fall. If you would like to see him on You Tube, Stetson Hat Company did a short promotion video earlier this year. Go to “Stetson Stories: Navajo-Churro Shepherds.” The video is four minutes long and well worth seeing. Our shearer wears a Stetson hat pulled over his eyes and is the protagonist of the video.

At present we do not have rams (male sheep), only ewes (females), but we hope in time to breed the ewes and increase our flock somewhat. We are preparing more pasture land on our property, where the sheep and donkeys can graze. With the good work of a number of brothers, the fields have been re-seeded, have been and will be irrigated, for once-fallow land to be used again.

What more can I say? As my desire is to promote more contact with the earth on which we live, I hope the animals we have or will be acquiring will assist in the traditional aspect of “labora” (work) that monks of Saint Benedict are to undertake, which can include some amount of farming, helping to promote life itself, as well as be a source of some income.