Our annual monastic community retreat is now drawing to a close. As mentioned in the last News Page, the retreat has been conducted by Sister Margaret Michael Gillis, FSP, a member of the Daughters of Saint Paul, who currently resides in their convent in Saint Louis, Missouri.
The twice-daily conferences given by Sister Margaret Michael have rotated around the theme of “Be My Disciples.” After each of the thoughtful conferences, Sister has distributed a one-page “Prayer Guide,” with Scripture quotes connected to the particular conference, to be meditated on. Also on the Prayer Guide are several questions for personal reflection, such as: What is Jesus asking me to do so that I may follow him with my whole self?
Finally, the Prayer Guide offers some suggestions for “Putting into Practice” what we have been hearing in the daily conferences. These have included encouragement to spend some extra time in solitary prayer or pondering more consciously and personally on the call to follow in the footsteps of the Divine Master.
Our retreat ends Saturday evening, October 29th. During these days our Guesthouse has been closed, but will be open again in the coming week.
We are deeply grateful for Sister Margaret Michael’s insights, dynamic presentation technique, stories from her own journey as a consecrated religious of over thirty years, her great sense of humor and ready availability to meet with monks individually during the retreat.
Ad multos annos, Sister Margaret Michael!
Abbot Christian and the monks 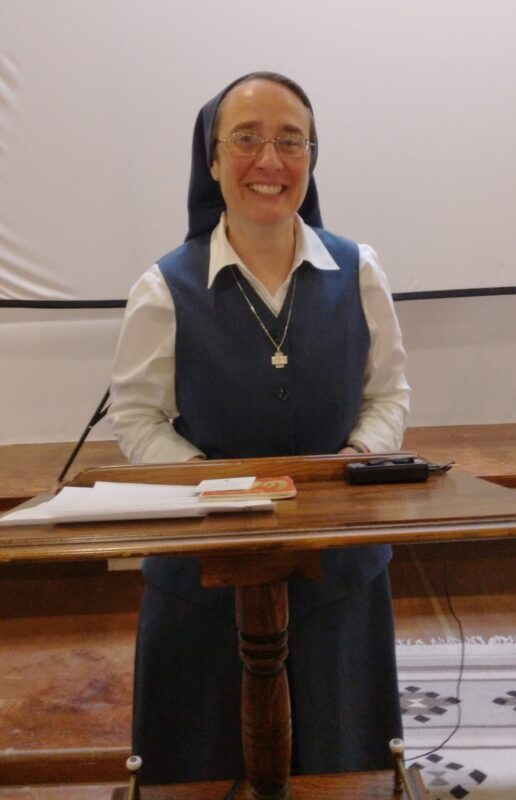