Modern men and women are not alone in the matter of self-isolation. The Father of Western monasticism, Saint Benedict of Nursia, who lived from 480 to 547 AD, was no stranger to solitude.
After a short stint as a student in Rome from about the age of 18, Benedict fled the corruption and loose morals of the big city to reside alone, first at Affile, then at Subiaco, in the hills some 40 miles beyond Rome. As a solitary, Benedict devoted himself to prayer and fasting for three years.
Where he dwelt alone at Subiaco, now called the “Sacro Speco,” the Holy Cave, has been an important pilgrimage destination for many centuries. Benedictine monks still reside there.
After the years of self-isolation at Subiaco, Benedict began receiving disciples and eventually established a dozen small  monasteries in the vicinity of Subiaco. Later he went to Montecassino, where he died in 547.
Today inside the Holy Cave of Saint Benedict at Subiaco there is a nearly life size statue of the saint, from 1657, carved in marble by Antonio Raggi, a disciple of the great Bernini, depicting Saint Benedict as a youth, contemplating a nearby cross.
Holy Father Saint Benedict, pray for us. 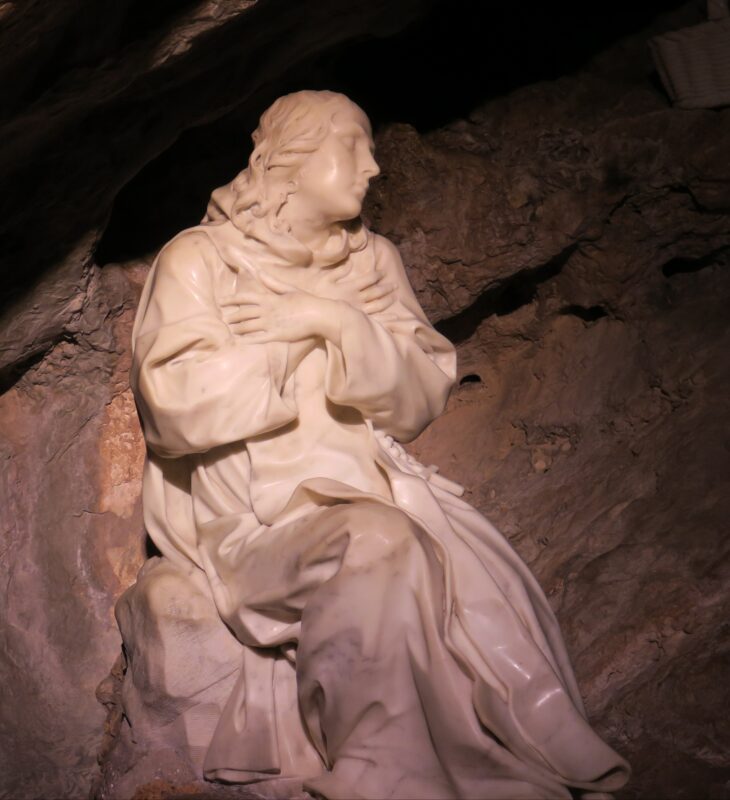