Abbatial Blessing of Abbot Christian Leisy, OSB on the Solemnity of the Annunciation of the Lord

A Resplendent Day for an Abbatial Blessing

On the Solemnity of the Annunciation of the Lord, the Most Reverend John C. Wester, Archbishop of Santa Fe blessed the Rt. Rev. Dom Christian Leisy, OSB as Abbot of the Monastery of Christ in the Desert.  Approximately 400 guests were in attendance including a 4th grade class from Holy Cross Catholic School, clerics and religious from the Holy See, Brazil, Mexico, and England, local leaders and longtime supporters of the monastery.  All delighted in participating in the Mass under an enormous white tent near the Chama River for the new Abbot who is loved and well received by many throughout the world, but especially in our corner of the world, Abiquiu, NM.

Archbishop Wester congratulated the overjoyed gathering celebrating the Solemnity of the Annunciation of the Lord, the Eucharist, and the abbatial blessing.  Although Mary is front and center in the celebration of this solemnity, Archbishop Wester encouraged Abbot Christian to be Joseph, Mary’s spouse who had a large role to play in the Gospel, for the community of the Monastery of Christ in the Desert. “As Abbot, you are called to guard this space in this part of the desert where Christ can be adored, abiding in the womb of the monastery,” the Archbishop said.

In response to the Archbishop and the overflowing warm of those gathered, Abbot Christian pledged himself to forming monks “for life.”  This means commitment by all to live the life fully, with its daily demands and challenges, and doing so joyfully, out of love for Christ and the brethren.

After the Mass, the participants convened under large tents adjacent to the Mass tent for a delicious monk cooked meal of lasagna, salad, garlic bread, a selection of three delicious cakes, and assorted beverages.  After the meal, guests were invited to an open house of the monastery to get a glimpse of cloister life.  The sun shone brightly throughout the whole celebration as were the faces of so many loving friends and supporters.  People could not help but respond positively to the beaming face of the new Abbot. 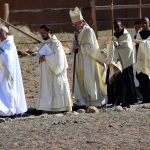 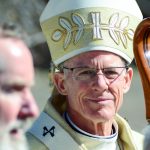 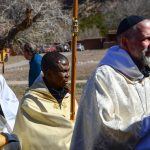 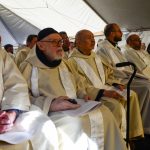 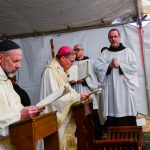 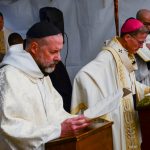 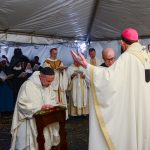 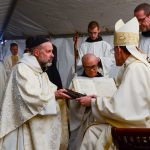 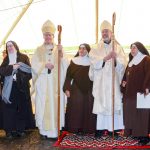